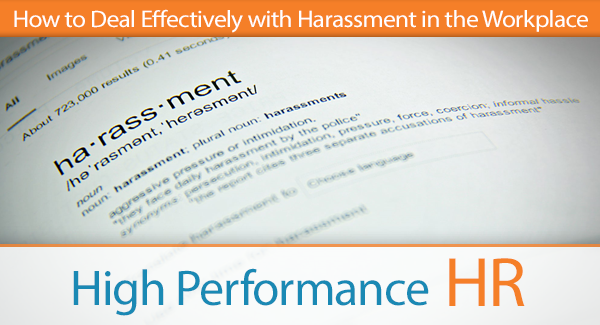 How to Deal Effectively with Harassment in the Workplace

It’s almost impossible to open a news website without seeing a headline regarding sexual harassment or sexual assault in the workplace.

Matt Lauer, Harvey Weinstein… They represent organizations that have just gone mad, that have failed to protect their people. The list of organizations and accused persons continues to grow. I find it particularly offensive when I consider how I want my family—both men and women—to be treated in the workplace. I am dismayed to discover the extent to which organizations are failing to protect their employees from predatory and exploitative behavior.

Those of us who are Christian professionals in the workplace have an obligation to not only live by the law but also demonstrate behavior that is biblical, and not a reflection of the current aberrant culture. We must ensure that all we do, and all the policies we institute and the responses we make to issues are above reproach.

I am in no way claiming that Christian organizations are perfect. Some have also failed (some, spectacularly) in this area. This is not just a Hollywood or industry-specific issue; it is a moral issue, a sin that knows no bounds. The Christian community has had its own share of scandals. Church leaders have failed us, and international mission leaders have failed us as well.

At In HIS name HR, we serve organizations across all professional sectors. We have served for-profit and nonprofit enterprises, higher education institutions, including Christian higher education institutions, churches, and ministries. One thing is for certain, when you get two or more people together, issues and conflicts inevitably arise—at the very least, innocent misunderstandings—which, when not handled well, can lead to complete pandemonium.

What should organizations do to protect their employees from harassment? We at In HIS Name HR believe that it is far easier to do than most realize. We suggest a three-prong approach:

Have a good policy in place that is easy to understand by both employees and managers. Have it embedded into your employee handbook and ensure everyone has signed for it. We promote having only a handbook. Most organizations can cover every topic in one handbook without adding additional policies. Having additional polices creates confusion, especially when you have to update multiple documents in multiple locations.

A best practice is to have the handbook online with a date embedded in the footer and have all employees in an employee meeting sign a receipt that they have been informed of the version and location. Then follow up in an email with a link to the handbook and a return receipt memorializing the fact that the employee has received the updated version.

Training should include awareness for all employees, and awareness, detection, and prevention for leadership. Employees need to know what is and is not acceptable in the workplace. For instance, there are two separate types of sexual harassment in the workplace under Title VII of the Civil Rights Act of 1964: a hostile work environment and quid pro quo.

A hostile workplace is just that: a workplace that is hostile and what the average or “reasonable person” would deem inappropriate. The complexity derives from the interpretation of an offense—what is offensive to one person might be considered the norm by another person. What good training does is help both the offended and the offender navigate how to abate a situation that risks elevating to explosive.

The second type of harassment, quid pro quo, derives its name from the Latin expression meaning “this for that,” doing a favor for a favor, as it were, where something is given in exchange for something else. In its most negative connotation, in terms of harassment, it is used when a person in a position of authority exploits their power to pressure or manipulate a subordinate to submit to behavior or activity, typically sexual in nature, which either promises a favorable outcome or threatens them with repercussions. Such favors include promotion, pay increases or bonuses, while threats may be made to compromise employment, reputation, or future opportunities. Both employees and leadership must be able to recognize the signs of such quid pro quo, and have sufficient ability or recourse to safely put a stop to it.

One aspect of the training is to “be real,” to let everyone know that certain behaviors are not acceptable, whether in the workplace or anyplace. Let them know that they should not do it, tolerate it, or ignore it, and they should personally help make the workplace an environment we would want all the people we love to work in.

When a complaint is raised, it must always be taken seriously. One aspect we have built into the complaint approach is to formally let the complainant know that we take their complaint very seriously, and that it will be thoroughly investigated immediately.

“People are denying the reality that most women grow up and live their lives being harassed, if not assaulted, and being propositioned or being pursued inappropriately,” Liberty University English professor Karen Swallow Prior says. “Almost every woman I know, including myself, has had something like that happen to them. This is just the world we grow up in.”

We must honor and trust all complaints that are brought forward, while explaining that if the complaint is found to be untruthful, the accuser may be subject to discipline up to and including separation. This might seem harsh, however, it is important that the accused be equally protected before and during the investigative phase. I have led more than one investigation where the person who was accused was able to provide evidence to prove their innocence. In this instance, “Innocent until proven guilty” applies to both parties, the accuser and the accused, and both are entitled to fair and confidential treatment during the investigation.

The investigation itself should be swift, and conducted by trained professionals. The best practice, if the investigation is performed internally, is to ensure the person investigating has no reporting relationships with anyone involved in the compliant. Ensure copious notes are taken and the privacy of all involved is protected. This is paramount to prevent anyone who is accused or involved from filing charges against the organization for false accusations.

The best way to list the contact for complaints is to employ consistency by supplying a title versus a name. You should, however, make sure there are two ways for people to bring forward an issue—have both a female and a male as points of contact. This helps any complainant to feel more comfortable bringing the issue forward. Oftentimes, the person who feels harassed prefers to talk with a like-gendered person.

Finally, if your organization is small, consider hiring a third party to operate as the point of contact. Our firm offers this to its clients, which gives their employees increased confidence, knowing their issue will be dealt with swiftly and objectively by a third party.

In His Name HR helps organizations build high-performance human resource programs. Visit them at In HIS Name HR or e-mail them here.

Mark A. Griffin is the founder and chief consultant of In His Name HR LLC. Connect with him on LinkedIn and Twitter.